Dorman students took home an easy win on Friday in all, going just as fans hoped that it would have.

The home team took home a victory over J.L. Mann, ending the night with a score of 49-0.

Quarterback and Mr. Gnimocemoh Colin Hill finished his night with 327 yards and four touchdowns passing also adding a TD run. He only played one series after the halftime crowning ceremony, so his night ended with the score 35-0. 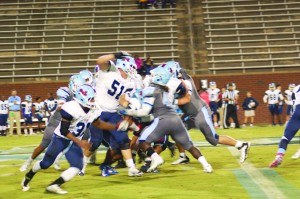